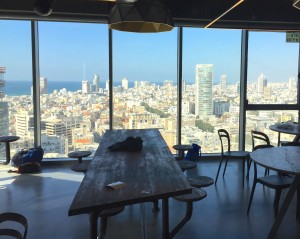 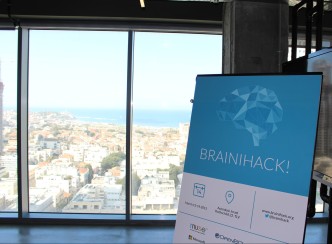 The goal? Within a day and a half, develop working applications using Brain Computer Interfaces (BCI). From virtual reality games, through automatic panic alerts to mind-based dating apps, we’ve seen many incredible apps built using some of the cutting edge devices in the field: InteraXon’s Muse, OpenBCI, Neuroelectrics’ Enobio and the not-yet published Neurosteer. 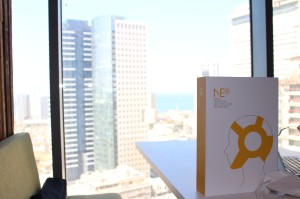 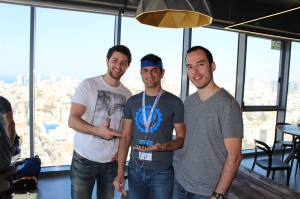 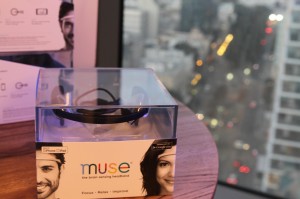 13 teams completed the weekend with working applications, and the winners are:

#1 Emochat – an emotion-enriched chat experience that aims to bridge the emotional divide in a chat vs. real life. The app visualizes your friend’s emotional state with different emoticons and colors so you can tell whether they actually mean what they say (I’m sure you can come up with many scenarios where that would come in handy… We all know there’s more meaning than is conveyed in words, and a chat makes it that much harder to read than real life). The Emochat team won an Enobio headset, a Muse headband, and also a Neurosteer device for winning the special Neurosteer prize. The application is fully open-source and available on github). 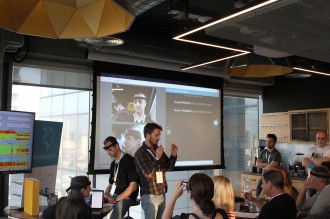 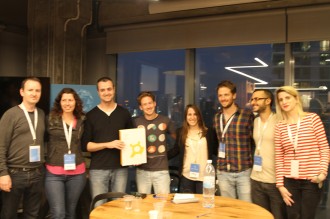 * BlueGSD – A labyrinth game (maze ball) using SSVEP. The team used an OpenBCI board, and in the maker spirit also 3D-printed their entire game (the maze itself, which drew a young crowd to the wonderful world of 3D printing 🙂 ). A blog post documenting their cool development process + code is available here. They won the special OpenBCI prize and received a board + starter kit. 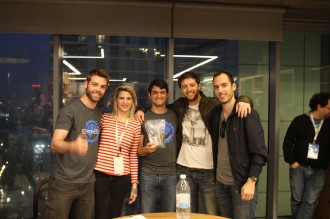 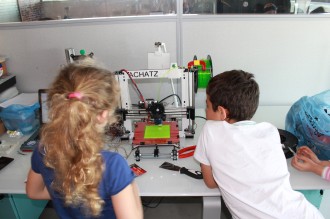 #2 Deja-view – the second place team developed an externally-created automatic memory using virtual reality. The long-term goal is something along the lines of Black Mirror’s Entire history of you (of which I’m a huge fan). They used Gtec’s g.nautilus EEG device and an Oculus Gear VR. They won a Muse headband. 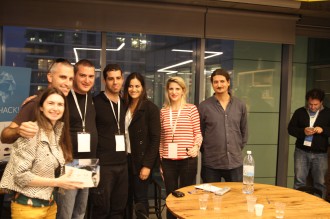 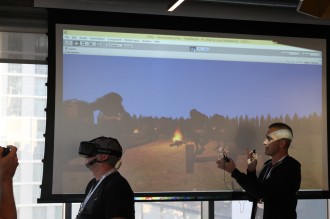 #3 Mind over mindstorms – a platform for motor imagery training. The team is based out of a lab in Ben Gurion University and were able to successfully demonstrate a mindstorms robot controlled solely by a Gtec hiAmp device drive through a slalom!

#4 Aspergame – Led by a neuroscientist father who opened the hackathon telling the touching story of coping with his son’s Asperger’s – the team had built a game for improving Asperger’s syndrome patients’ attention to social stimuli.

Both teams won a Muse headband. 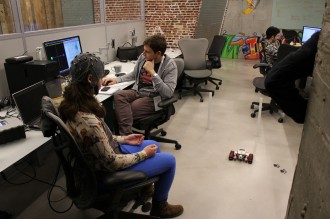 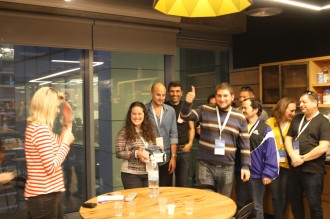 >  Right path – Bicycle alert system that identifies when the cyclist intends to turn left/right and signals automatically
>  Person of interest – Prevent misidentification using face recognition & EEG
>  Hive mind – Collaborative decision making – all 5 team members and some judges moved a bee on the screen, together!
>  Brainifeed – Subconcious content filtering, lets you automatically read your feed and stop on the stories your brain signals it’s interested in
>  Shoni – Alert system upon distress, panic and falling asleep. This could be used for driving, elderly care, and many other uses.
>  Date my brain – matching individuals based on EEG pattern (because, between us, how good are those dating sites matching algorithms anyway? 🙂 )
>  Activity tracker – Analytics to monitor your online activity
>  INFinity – Neurofeedback with VR 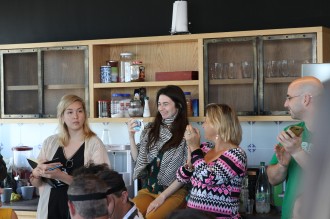 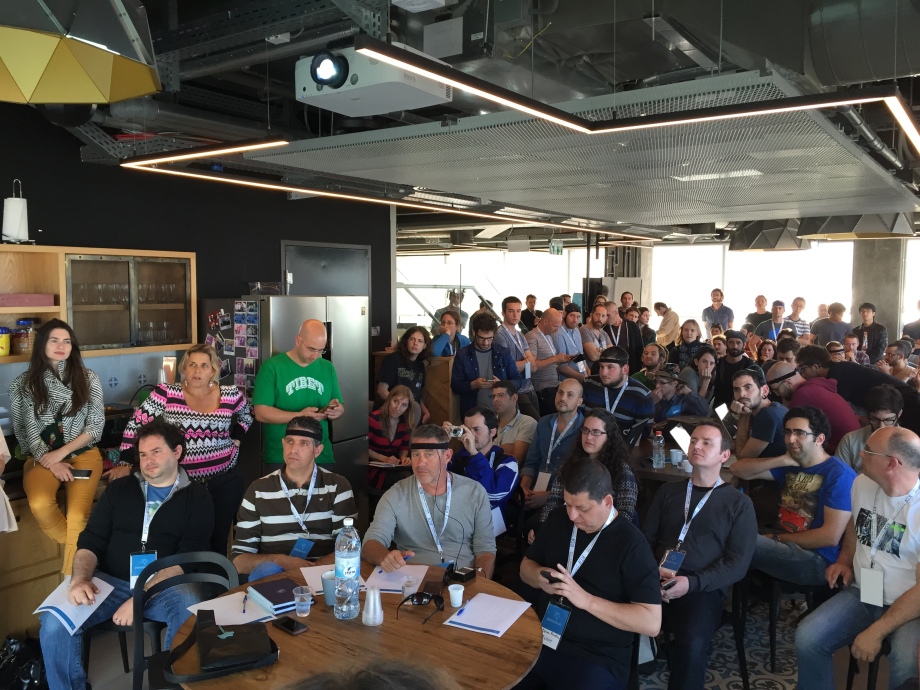 More picture here.
Pictures on this post by Yannick Roy from Neurogadget and Hamutal Meridor.

Many thanks to all you hackers for making this the amazing, inspiring event it was!

Brainihack brings together developers, designers, neuroscientists, makers and artists for a weekend of developing with the interfaces of tomorrow.

Get your hands this March on cool technologies like brain computer interfaces, 3D-printers, motion and gesture control and more at Autodesk’s new Tel Aviv office. Join fellow hackers and tech innovators like Emotiv, OpenBCI, InteraXon and others to develop with cutting-edge technologies.

Join us at The NeuroGaming Hackathon!

Get your hands on cool technologies like brain computer interfaces, motion and gesture control, virtual reality and more at the NeuroGaming Hackathon!

Join developers, designers, makers, tech innovators like Emotiv, NeuroSky, LeapMotion, OpenBCI and others to develop with the interfaces of tomorrow.
Come enjoy food, drinks, and a chance to win over $50,000 in prizes!

The hackathon is organized by Brainihack as part of the NeuroGaming Conference.

PLEASE NOTE: You MUST register here in order to attend.

Brainihack aims to explore brain computer interface technologies and foster a community of hands-on enthusiasts around this emerging field.

15 teams presented and competed in the grand finale (read about them here). And the winners are:

1. Miyagi – Learning Enhancer
Ever tried studying for an exam and found your mind wandering instead of reading the material? Miyagi is here to solve your pain! It helps students concentrate as they’re studying while wearing a BCI. The system sits on your browser and visualizes your focus / attention while you’re studying (as a brain that gets full when you’re focused, and empties down as you lose focus). Once you’ve lost focus it will pop up related content in video format, e.g. a Coursera video. 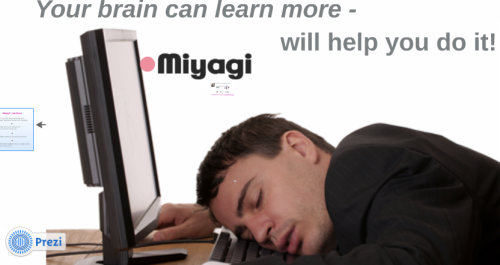 2. Mind your poem
Write poetry with your mind. This art piece uses a BCI headset to read your brainwaves, creating a tag of words that are formed into a poem, visualized and printed out on paper. From concept to physical artefact. 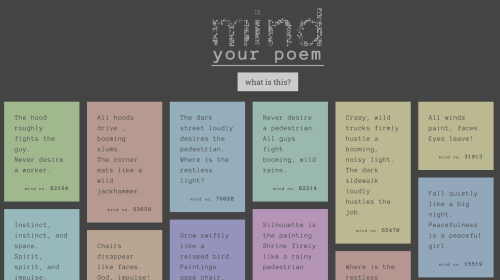 3. “Tifsuni” – a hand-slapping game catcher
Know the hand-slap game? This fun application detects when one player is about to slap his foe, and signals with an audible warning so the other can avoid getting hit. Check out the video of Tifsuni’s development process (and some of Brainihack in general) below:

Prizes:
Miyagi, who won the #1 spot won an Enobio device, worth thousands of Euros, courtesy of Starlab / Neuroelectrics.
The 3 finalist teams all got a Muse headband by InteraXon + free entrance to the BrainTech Israel conference + a stage to present their project at the conference. They all attracted a lot of attention and have already gotten both people from academia as well as investors to start a conversation with them.

Above all, what was so amazing about this event was we started a community of brilliant people from diverse fields, all interested in brain tech. There definitely is going to be another one – everyone’s asking for it. So stay tuned! 🙂 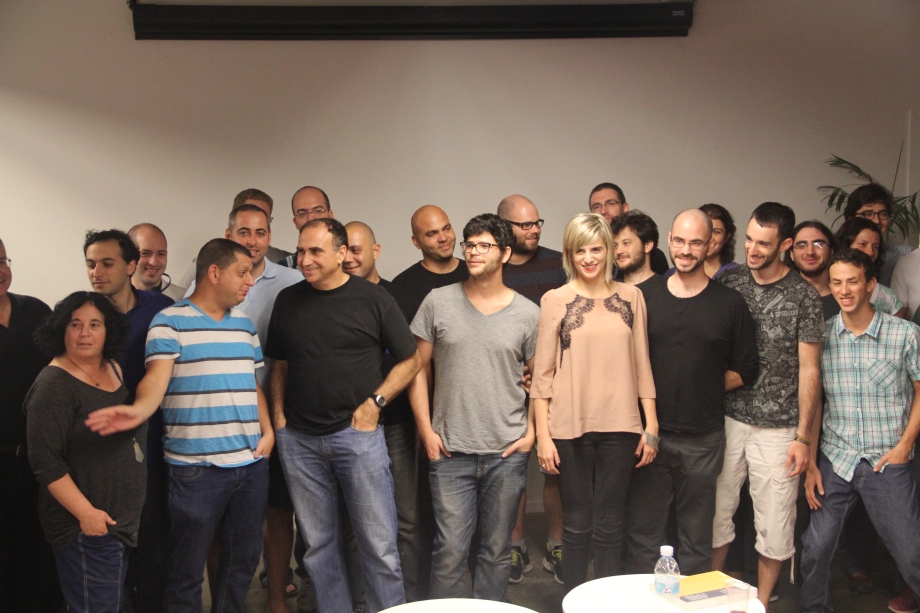 Brainihack is a weekend long hackathon that will put Brain Computer Interface devices in the hands of developers, designers, makers and visionaries.

Come explore using the brain as an interface!